Review and Opinion of Kurzweil Forte 8 and Where to Buy It?

Among its stage piano models, we have the Kurzweil Forte 8 with a price of £2,899. This is a great musical instrument with many functions and features that make it a very interesting digital piano, which has the following characteristics: 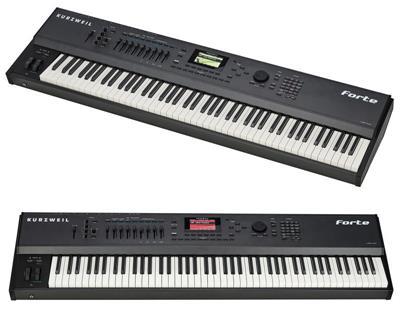 Now that we have listed and described the features of this keyboard there is no better way than to take a look at the following video where they tell us more about the Kurzweil Forte 8 and you can hear how its different sounds sound.

Now let’s compare the Kurzweil Forte 8 with its more common alternatives. Also at the end of the post you will find a section with the best shopping possibilities for this digital piano. But you can go directly to that part of the post by pressing the following button.

We have some of the best options for digital stage pianos. On the one hand the forte eight comfort that has both a great amount of sounds and a good polyphony, a great amount of effects, its functions and physical controllers and its different connections, make it a real opponent to the Clavia Nord Stage 3 88, which has long been one of the most popular keyboards among professional musicians. And for the price it is a real bargain. Likewise the Clavia Nord Stage is not far behind with its functions and different pedal inputs that dominate the Kurzweil in that section. We also have to know that the Kurzweil is slightly heavier than the Clavia Nord Stage, which is a great stage keyboard.

We will have from the comparison of the following digital pianos of the comfort brand: the Kurzweil Forte 8, which as we have already mentioned has a price of €2899/£2,699 and the Kurzweil Forte SE €1800, therefore the difference of approximately €1100, with this great difference we will see their similarities and differences:

Now we come across two excellent models from the Kurzweil brand: the Forte 8 and the Forte SE, which are really very similar but have few differences that characterize them from each other. For example, the Forte SE has 8 split zones, offers more physical controls and is lighter in weight. With all these differences we could say that it is the best, but let’s also remember the great memory it has to record and modify different sounds. This gives the Kurzweil Forte 8 a great advantage.

And now a video from the Kurzweil Forte SE:

You can also see our review of the Kurzweil Forte SE in more detail.

Where to buy Kurzweil Forte 8