Yamaha Corporation is a Japanese company with a wide range of products and services, mainly musical instruments and electronics. Now we will have the review of the Yamaha YDP-144 B Arius. This piano is a top seller and I always include it in my top selection of the best digital pianos. This is a very balanced digital piano for an appropriate price. One of the best values for the money. 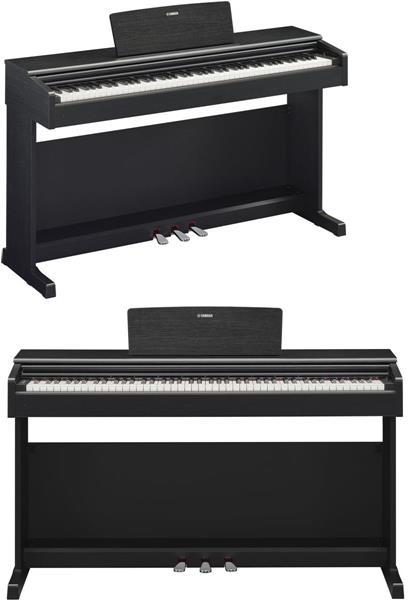 This is a piano thought for someone who wants to study at the conservatory or wants to study piano thinking a little bit about the classical or acquiring a strong technique. It is suitable for intermediate level of classical music conservatory and also for beginners. It must be said that there are also people with a small budget who study the higher level with digital pianos from this range. This is not at all unusual. Not everyone has a budget of 3000 euros or more.

The good thing about these pianos is that they don’t go out of tune, although sometimes they need to be replaced, but these are cheap repairs. They depend on whether you study for many hours.

It is a piano that also has a very acceptable counterbalance, plus it has USB MIDI which allows you to connect it to a laptop and write MIDI tracks that can then be exported directly to a score.

Now that we have seen the features of this Yamaha YDP-144 B Arius piano look at this video review. Although it is in English it describes quite a lot of the functions, and you can also hear how the piano sounds. You will also see how the piano functions can be controlled with the accompanying Yamaha Smart Piano app.

Well, let’s compare this piano with other options that are around its price and are very interesting. Let’s compare it with two digital pianos without support and two with acoustic piano support.

Casio presents a very interesting model to compete in the £755 range and does so with a very complete keyboard.

The main difference is that it is not a piano with furniture and it is a portable piano with a very light weight of 11.4 kg. This makes it perfect if you want to go to a concert with a keyboard that has many functions and will give you a lot of freedom of interpretation without giving up the keyboard with weighted keys and a real piano feel. Portability is one of the main reasons why you have to decide between the Casio or the Yamaha. The YDP 144 is not a model designed to be moved. It’s more suited to practice at home.

The Casio PX 3000 is a very interesting proposal because it has a lot of sounds and it also has the weighted keyboard of a piano. This allows you to experiment with many effects and sounds without sacrificing a real acoustic piano feeling.

In addition, the Casio PX S3000 has enough polyphony to play all existing scores.

The Yamaha P144 with its IAC systems described above offers a more realistic acoustic piano feel. The Casio PX 3000, on the other hand, is designed for you to be able to practice with it but also to take it to concerts and rehearsals.

In addition, the Casio PX has speakers with decent power.

The Casio PX S3000 offers the possibility of battery operation but also has 8 W speakers with enough power to play indoors. If you want to play in the street in a very open space it might be short, so I recommend you to accompany it with the popular Roland Cube street amplifier

I think the differences between the two pianos are already very clear and the choice is much clearer. If you only want to practice the YDP 144, but if you want to go outside or move it to the rehearsal room, the S300 is a real wonder at a very good price.

And here is a video of the Casio PX-S3000 Privia digital piano with its enormous number of rhythms:

If you want to know more about this option, click on the following link to see the Casio PX-S3000 Privia

In this case we are dealing with a case similar to the previous one. The Yamaha DGX 660 is also designed to be transported, although in this case it is more suitable for the rehearsal room, since it can be used to play in the street or in a place without electricity.

What we talked about in the previous point also applies when comparing these two models. The Yamaha YDP 144 aims to imitate an acoustic piano more and gives you more stability when playing thanks to its structure.

I mention this option too because it’s cheaper than the previous Casio PX and also has a good weighted keyboard and many sounds and effects to experiment with.

An interesting feature is that it has an “In” input so you can connect a microphone and have the signal output through the piano speakers. On the other hand it has no line output as such and that can limit a bit in case you want to play in big concerts because of the power of its audio output signal. The above Casio does not have this problem because it has a line output with enough power.

It is cheaper than the Casio we have seen before and has a very good sound quality. It’s a top seller for its price.

Let’s put the features of these pianos in a table so you can compare:

And here is a video of the Yamaha DGX-660 digital piano:

Well, let’s go now with another digital piano that this case is very similar to the Yamaha YDP 144. We could say that they are almost twin pianos but there are some differences.

To start with the YDP S34 is a slightly smaller and lighter model. This is an important factor if you want to bring it into the house and have just enough space.

The Yamaha YDP 144 also has a duet mode for playing two people but the most important point is the previous one. The S34 was created in case you didn’t have enough space for the Yamaha YDP 144

And here is a video of the Yamaha YDP-S34 B Arius digital piano:

The Korg LP-380 is around €689/$1150/£679. In this case we compare it with another model that is also designed for studying piano, has furniture and is a little cheaper, but it depends on your country or store.

The Korg is a digital piano that has much less background and this can be important if you have little space. On the other hand, the Korg LP 380 has more sounds and a decent polyphony of 120 notes that you can play almost anything.

The Yamaha has several escape effects and the Korg doesn’t.

The Korg has much more powerful speakers but does not have the added features of the Yamaha YDP 144 to control the sound sensation and make it more real. On the other hand the Yamaha has a duo mode for playing with an instructor.

The Korg LP 380 can be a very interesting option if the price difference reaches 80 euros. But if you can afford it you will have a better experience with the Yamaha YDP 144

Let’s put the characteristics of these pianos on a chart so you can compare:

We will now compare the Yamaha YDP-144 with the Kawai KDP-110. The Kawai is about 90 euros more expensive than the Yamaha, we will analyze if this increase is valid according to the features it offers.

Both are digital pianos with furniture included, the Yamaha as we have seen has its CFX piano sound and the Kawai offers the SHIGERU KAWAI SK-EX concert piano sound capture, which is an excellent grand piano.

Both have 88 weighted keys, with different hammer actions, typical of their respective brands. An important difference is the number of sounds, which in the Yamaha we find 10, while the Kawai is 15.

Both have 3 pedals. And they have a cover to protect the keys.

A relevant difference is the output of the speakers, while in the Yamaha we have 8W of power per speaker, in the Kawai we find stereo speakers that add up to 40W (20W and 20W).

In a matter of measures they are very similar and in weight exactly the same, both in 38 kg.

Let’s put the characteristics of these pianos on a table so you can compare:

And here is a video comparing the pianos:

As we can see, we have two pianos with excellent digital performance. For its part, the Casio offers optimizers that help to simulate a real piano.s that help to simulate a real piano. However, the Casio is the winner having a greater amount of sounds and polyphony also taking into account its great power of speakers that could serve in a closed room without the need for another amplification.

Let’s put the characteristics of these pianos on a table so that you can compare:

Finally, we have the comparison between these two digital pianos the Yamaha GDT-144 aryan which as we have seen has a price of €777/$1000/£715 and the Roland FP 30 which has a price of €619/$700/£555, having a remarkable difference of £150 between both. We will have their differences and similarities in the following versus:

We found excellent digital pianos, however the Roland has better performance for its wall microphone input (if you like to sing), Bluetooth wireless connection, slightly more powerful speakers reaching 11 W each and its light weight of 14. 1 kg make it a very portable option too.

Let’s put the features of these pianos in a table so you can compare:

And now for our review of the Roland FP30:

If you’re interested in learning more, we invite you to see our review of the Roland FP30 Digital Piano

Where to buy Yamaha YDP 144