Easy Guide to the Guitar

The guitar is nowadays the most popular musical instrument in Spain and this is due to several factors.

The guitar is a harmonic stringed instrument that can be used as an accompaniment or as a solo instrument. On the other hand, it is a musical instrument that is very easy to carry and has a reasonable learning curve (to a certain extent).

Harmonic instrument means that it can make chords. Which would be more or less the “cushion” on which a melody such as a song rests. A chord is made up of several notes at the same time and each string produces a note.

But the guitar is not only very popular because of the factors described above, but also because you can get decent guitars for a relatively low price. For as little as 100 euros you can get very basic guitars, but they are good for learning because they stay in tune long enough. This has led to a remarkable increase in its popularity and its use has spread notably in the classical world and in popular and commercial music all over the world.

In short, the guitar is an instrument that is easy to start playing and reasonably affordable. Although that doesn’t take away from the fact that mastering it like a master requires study like any other instrument. It’s just that reaching a certain level is quicker than with other instruments. Also, there is a certain success in learning it in a self-taught way.

That said, let’s go through the different types of guitars out there because this popularity has developed a huge world in which it’s easy to get lost. The main types of guitars we will see are: 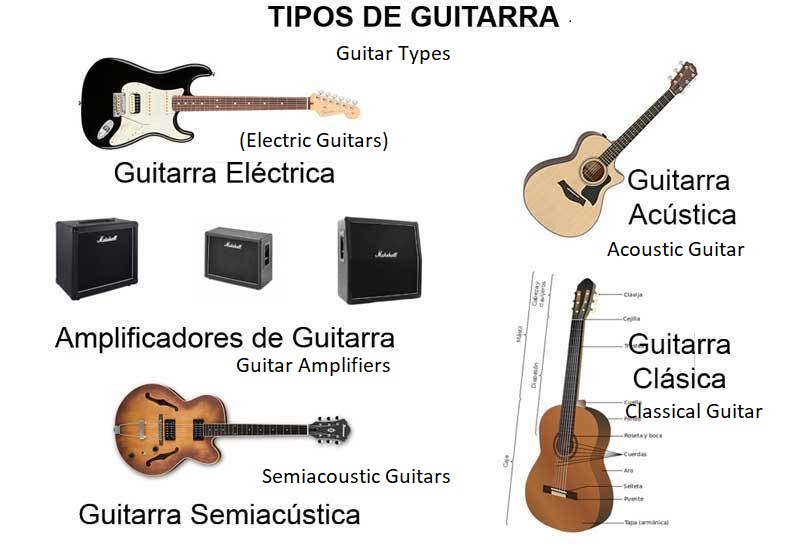 The electric guitar is the queen in sales and without a doubt it is still the most popular instrument despite the fact that electronic music and synthesizers are stealing a lot of space.

It has no soundboard and the sound is produced by a pickup that picks up the vibration of the metal strings and transforms them into an electric signal.

There are types of electric guitars such as the Stratocaster, Telecaster, Les Paul, 7-string guitars… Many of these types of guitars were in their day a first guitar that created a real school.

The electric guitar is indicated for styles like Rock and Heavy Metal but the truth is that they offer infinite possibilities and their sound is totally customizable by modifying its parameters with the potentiometers and using effect pedals and all kinds of accessories. This is an advantage, but at the same time causes a bit of confusion to the beginner but if you want to know more click on our guide above.

Here is a video with a Fender Stratocaster based on the model used by the great Jimmy Hendrix.

When talking about guitars we must also talk about guitar amplifiers. There is a lot of variety in the market and depending on the guitar you have chosen you will use one or another.

Although guitars that have a soundboard sound by themselves many times the sound of the guitar is not powerful enough to be heard. And this can happen even at parties with friends. Many people think that an acoustic or Spanish guitar can be played in a restaurant for 60 people and it is not like that. The murmur of people talking literally eats up the sound.

On the other hand, the electric guitar needs an amplifier to play. Because it doesn’t have a body, it doesn’t sound.

Depending on the amplifier chosen we will have at our disposal different effects and sounds. And of course you will need more or less power depending on what you want to do.

With our guide you will finally understand the difference between a tube amp or a transistor amp or if there are amps that fit any guitar…. The truth is that an electric guitar can be connected to very simple amps designed to sound clean. With effects pedals you can do a lot of things. But when you want to get to certain levels of amplification you have to use heavy stuff.

So, click on our guide and you’ll know which amp you need depending on your guitar and the sound you want. And at the same time you’ll save a lot of money by knowing better what to look for. Here’s a video of my favorite portable amp that I use with friends of mine when we go out to play outdoors. This one in particular is good for any kind of guitar and responds very very well at maximum volume without overdriving. The Roland Cube Street, a best seller that also comes with a mic input that can also be used for a keyboard or similar:

Semi-acoustic guitars are actually electric guitars with a soundboard. They are ideal for styles such as jazz and blues. They also stand out for their vintage look based on legendary Gibson models.

They can have a hollow or semi-hollow body and are designed to have a clean and beautiful sound, although if you want to subject them to high amplification and distortion like the one used in heavy guitars, it is better to buy an electric guitar. If you don’t, the sound signal that comes out of the soundboard can be distorted.

Although they are designed for clean sounds, they also admit effects, but without overdoing it.

Here is a video of blues legend BB King with a semi-acoustic guitar:

BB King - The Thrill Is Gone

The acoustic guitar is one of the most popular types of guitar for beginners. It is often used like the semi-acoustic in musical styles such as jazz, pop, blues and folk.

On the other hand, the classical guitar usually has a wider fretboard, the distance between the strings is bigger and the strings are made of nylon.

Acoustic guitars are usually bigger than classical guitars and a bit more expensive, although there are very affordable models compared to other musical instruments.

If you want to know more have a look to our acoustic guitars basic guide.

Watch this video of Jimmy Hendrix playing the blues on a 12 string acoustic guitar:

We finish with one of the most common guitars in Spain, the classical guitar. This type of guitar is usually ideal to start together with the acoustic guitar. The truth is that I personally like a lot that people start with nylon strings. Because they are softer and sometimes metal strings can be a bit hard to start with.

The classical guitar includes the Spanish and the Flamenco guitar and we explain their differences in our guide about this guitar.

The classical guitar is very versatile and together with its subtypes can be used in any type of music. The difference with the acoustic guitar is almost a question of what sound you prefer to have and what styles you want to play.

Classical guitars have the cheapest models for beginners like for example the ultra-popular Yamaha C40.

Both acoustic guitars and Spanish guitars can have a preamp attached to the soundboard which is like a microphone that transforms the sound wave produced in the body of the guitar into an electric audio signal. In this way they can be amplified, although they are usually a bit more expensive those that include this.

We leave you here the link to the guide about this guitar and a couple of videos. One with a Spanish guitar played with plectrum technique in the first one and in the other one a top of Brazilian music:

I hope you liked this guide and if you liked it save it in favorites or share it on your social networks if you want to help someone to understand the differences between the different guitars. thanks for reading us!