Among its models of stage pianos, here’s the Kurzweil SP6 with a price of €999/$1300/£938. This is a great musical instrument with many functions and features that make it a very interesting digital piano, which has the following characteristics: 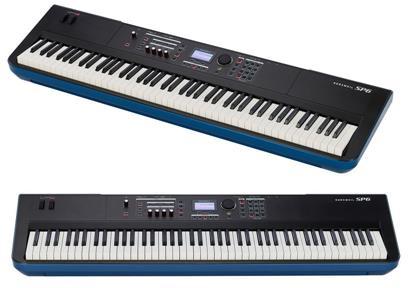 Two very interesting videos for you to see and hear all the power of this keyboard:

Now let’s compare the Kurzweil SP6 with its more common alternatives. Also at the end of the post, you will find a section with the best shopping possibilities for this digital piano. But you can go directly to that part of the post by pressing the following button.

Both digital pianos are very similar, taking into account that one is a stage piano and the other is an arrangement piano. The PC4 has better and more features, having a greater amount of sounds and more physical controllers, which allow a greater control towards its different functions. It can also be noted that the PC4 has four extra storage inputs and has a lot of space for compositions, demos and arrangements. Both are excellent in their different purposes, and the SP6 is still an excellent choice for stage piano.

We invite you to listen to the sounds of each piano and make an auditory comparison for yourself.

And now a video of the Kurzweil PC4

If you want to know more about this model don’t miss our review of the Kurzweil PC4.

Here is a video of the Yamaha’s engine:

First, a comparative video between the two teams, in which it is worth mentioning certain important points:

Here is the video, listen to each piano and draw your own conclusions.

And now a video of the Yamaha MX88

If you want to know more about this model don’t miss our review of the Yamaha MX88.

Both are excellent stage pianos, each having its own advantage over the other. While the Kurzweil has a greater amount of sound. The Roland, has a virtual wave expansion, eight phrase pads to trigger samples or songs, and a microphone input with effects to modify the sound of the voice.

We’ll put the characteristics of each of these pianos in 2 different columns to make it easier to see the differences:

And now a video of the Roland Juno DS88:

Where to buy Kurzweil SP6