The Kawai es110 demonstrates that the Japanese brand not only has a talent for producing acoustic pianos, but is also capable of designing high-end digital pianos. 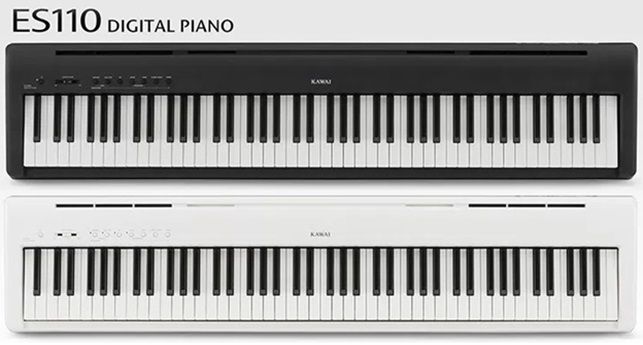 If you are looking for a high quality digital piano with 88 weighted keys, sensitivity similar to an acoustic piano, and at a very affordable price; the Kawai is110 is for you. The Kawai ES110 is a fairly complete option, as it is a “basic” digital piano that includes everything you need for any pianist.

This Japanese brand model has a sustain pedal included (damper pedal F-10H), and a lectern, in addition to having a fairly acceptable connectivity and other features that can make it the ideal digital piano. If you want a cheaper digital piano you will have to choose the Yamaha P45 or the Casio CDP 130. Although they are worth for the study of the piano, they contain more scarce benefits and sounds, comparing with this Kawai. Later, you have the comparison with other models that do shade the Kawai ES 110.

Let’s move forward with the functions and features of this digital piano. But first we’ll give you some comparative charts with the best places to buy it:

Our favorite place in America and Asia is Amazon, to buy in Europe Thomann:

The Kawai ES110 features 88 pressure sensitive keys that work with a weighted keys system called “Responsive Hammer”, which simulates the weight of an acoustic piano key with great precision. Unlike other digital pianos, the Kawai ES110 focuses more on metronome functions, connectivity, recording and the included lesson method, making it a good choice for those looking to learn the piano. The features of the Kawai ES110 are:

The sound of the Kawai is110 is really good. The difference between an acoustic piano and this digital piano is practically null, the nuances and cleanliness of the sound added to the sensitivity and counterweight that have the keys provide an experience very similar to that of a digital piano.

The sound is recorded from an acoustic piano Kawai EX Concert Grand and the sampling of the sound wave has pleasantly surprised us.

The piano also offers the ability to specify whether you are using a digital piano stand or putting it on a table. The piano itself will optimize the sound on that basis.

The following video shows the sound of the digital piano ES110:

At this point in the Review, it is not surprising that the Kawai ES110 is totally focused on pianists or future pianists, the sound and combination with the experience of sensitivity and weighted keys provides an experience virtually identical to that of a piano. Here’s a video where you can learn in detail the experience of a pianist using the Kawai es110, in addition to appreciate again the sound quality.

You can also customize the following aspects of the sound:

We love this functionality of digital pianos and each one brings it. Dual mode allows you to layer and have one sound, sound on top of another. This allows you to play a piece of piano and have a string accompaniment, while playing as if you were accompanied by violins.On the other hand, there’s the split mode that allows you to divide the keyboard into 2 different instruments. The piano is played on one side, and the bass on the other. We’ll give you an example in the next video:

When it comes to connectivity, the Kawai ES110 is well equipped with MIDI input and output, 2 inputs for headphones, Bluetooth, and an in-line input/output and the input for connecting the sustain pedal or the triple footswitch, however, you must be careful as it does not have a USB port.

Despite the simplicity shown by the Japanese brand, the connectivity in the Kawai ES110 is virtually complete because it really only lacks a USB port and flash memory, yet has all the connectivity to work as a digital piano.

One thing I like about the Kawai ES110 is that it comes with an F10 – H pedal. What is better than other sustain pedals like the ones that come by default with the Roland FP 30 or the Yamaha P115. 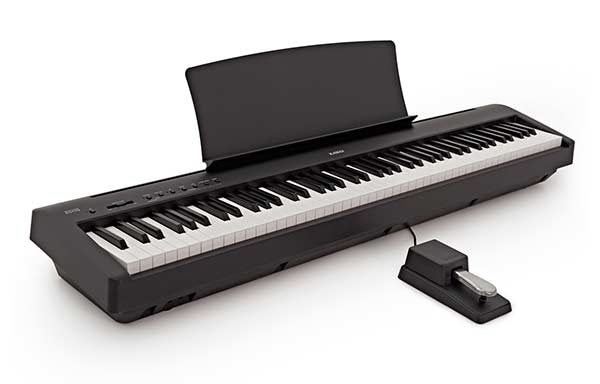 Advantages and Disadvantages of Kawai ES110

The advantages of the Kawai ES110 are:

The disadvantages of the Kawai ES110 are:

It has a learning system, but the truth is that these systems integrated into pianos are merely for playing. If you want to learn in a self-taught way (which is not the most recommended) we recommend you take a look at apps such as Flowkey.

A great competitor of the Kawai ES110 is the Roland FP30, both keyboards are very similar, they have functions suitable for a pianist, however, the main differences are:

Now if you want power without extra amplification the Roland FP30 is a more interesting option.

It is not surprising that the ES110 is better than the Kawai ES100, as it is the new model. However, both models share virtually all functions and features, so they are great competitors.

The main differences that present these two models of Kawai are: The Kawai ES110 has the new Responsive Hammer technology and the ES100 maintains the old.

Despite having only two differences between the two models of Kawai, it is necessary to point out that the technology of the sensitivity and weight of keys is an important difference since.

Kawai got closer to the sensitivity of a piano through the Responsive hammer, as the response speed and sensitivity increase over the previous system. On the other hand, the ES110 gains 1 voice, which can be irrelevant especially if you plan to use it as a keyboard.

The Kawai ES110 I like, especially in the touch they are similar range, but we do not expect much difference between the two. The truth is that the Yamaha P125 and the Kawai ES110 are tough competitors and sometimes you have to decide depending on the price each one is at.

Below is a video where you can compare the sound quality of Kawai, Yamaha and Roland on their digital pianos:

If you’re looking for a digital piano with great sound quality and user experience for less than 1000 €, the Kawai ES110 is for you. Despite the fact that the Japanese brand’s initial level offer is not totally perfect, its quality is far above that of its competitors.

The Kawai ES110 is totally recommendable for a pianist since it has all the necessary characteristics for it; the responsive hammer system imitates practically to the perfection the experience of playing a piano, in the same way the quality of sound that shows with its 192 notes of polyphony does that the sound resembles in great way.

For those who want to learn to play piano or acquire a digital piano to transport, or use at home and want to have the sensitivity and sound of an acoustic piano, the Kawai ES110 is the best alternative… especially if we talk about options for less than 1000 €.

Before buying any instrument, it’s necessary to consider the best option for your budget; if you want to know other options that are very competitive in relation price benefit we recommend you to take a look at our ranking of digital pianos. If you’re looking for an option that ranges from 200 € to $ you may be interested in reading our guide to the best inexpensive keyboards.

Where to buy Kawai ES110

It is best to buy from an online store that can guarantee you a correct transport. Besides, buying online can save you a lot of money. You can search for the product at any Kawai dealer in your area. As we said bellow, in Europe always check Thomann. If you live in Asia or America, always check Amazon. Here the direct links to the product.

For a similar price you have the following pianos and keyboards: